Belgium’s 'Big Day of the Apple'

Every year since 2002, on the last Sunday of October, Friends of the Earth Wallonia and Brussels/Les Amis de la Terre Belgique, has invited people to 'The Big Day of the Apple'. And 2013 was no different.

On 27th October, at Château de Wégimont, more than 1700 people of all ages gathered throughout the day to smell and taste nearly 150 local varieties of apple and to learn and exchange information about the apple harvest. This year's theme was 'The apple in all its forms'. On the menu were special guided visits of the orchard and bee garden, the chance to taste nearly 150 varieties of apple, an organic market, and activities for children.

Through a programme of workshops Les Amis de la Terre shared their members' extensive experience of planting fruit trees and maintaining a real orchard. There were also presentations on the health benefits of apples and on its economic viability. All the activities took place in the context of Les Amis de la Terre's ongoing work on transition.

The event was made possible by the help of more than 30 volunteers.

Didier Brick of Friends of the Earth Wallonia and Brussels/Les Amis de la Terre Belgique said: "At our 'Big Day of the Apple' people could discover the flavours of nearly 150 varieties of local apples – a rich and surprising choice when compared to the mere five varieties available commercially. We hope that we have planted seeds in people's minds today about reconnecting with local food and nature that will grow into strong trees in the future." 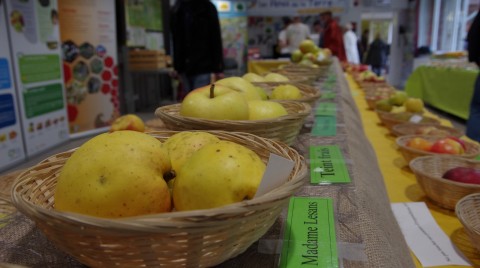 Friends of the Earth Wallonia and Brussels/Les Amis de la Terre Belgique is working towards a society which takes care of the earth and its inhabitants. Through its network of local groups it is proposing changes on an individual level (voluntary simplicity) and changes on a collective level (transition projects) in order to create a more fair society.