Lawyers and environmental groups have today challenged the European Commission to take legal action against the Bulgarian government over a shocking depletion of wildlife in a key EU-protected nature site, Kresna Gorge.

A new scientific analysis reveals that protected bats have fallen by 92%, endangered tortoises and snakes by 60%, and some vertebrates may now be extinct in Bulgaria’s natural wonder, Kresna Gorge. This has been caused by an increase of lorries and cars in the nature haven, driving between two sections of a new EU motorway built up to either end of it.

The evidence by top Bulgarian scientists is included in a complaint against Bulgaria’s government to the European Commission and its Vice President Frans Timmermans, filed today by CEE Bankwatch, ClientEarth, Friends of the Earth Europe, and Za Zemiata. The complaint details violations of the EU Habitats Directive during the construction of an EU funded motorway, which is leading to the unprecedented deterioration of natural habitats and the disturbance of key wildlife – such as protected bats, snakes and tortoises.

“Bulgaria is blessed with extraordinary and irreplaceable nature like in Kresna Gorge, but it is being decimated at an astonishing rate. Cars and lorries are daily massacring rare wildlife in the nature reserve and there has been a complete failure of the government to stop this. It’s essential that the European Commission starts immediate proceedings to stop the destruction of our nature – traffic must be routed away from this nature jewel.” 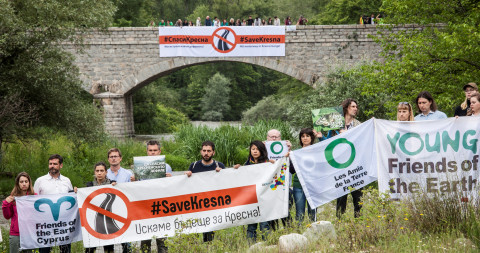 “It’s unacceptable that Kresna Gorge’s unique wildlife is being destroyed, in breach of European law, by the authorities obliged to protect it. If the EU Commission does not take action, the situation could reach a tipping point where there will be no wildlife in the Gorge left to protect.”

Kresna Gorge, a narrow river valley in south-west Bulgaria, has been classified an exceptional European natural hotspot due to its unique abundance and diversity of wildlife – it has the highest concentration of biodiversity in Bulgaria and the Natura 2000 site is inhabited by 92 protected species. The Gorge faces ruin by planned construction of a pan-European motorway through it; but already traffic flows have dangerously depleted its wildlife.

The European Ombudsman has this week announced an inspection of the Commission’s handing of the Kresna Gorge case.

Bulgarian Prime Minister Boyko Borissov on 23 May 2019 indicated that plans to complete the final section of motorway through Kresna Gorge may be postponed or shelved, but leaving motorway traffic to continue to damage wildlife through the existing Gorge road.

Responsibility for taking legal action against Bulgaria will likely fall to the next European Commission.