On 31 October 2019, Hnuti Duha / Friends of the Earth Czechia celebrated after the Czech Parliament signed off on a few important legal reforms to the Czech forest law that will help create more living forests. The changes should ensure that more dead wood is left on the forest floor, and stocks of deer and other forest animals for hunting are reduced. These reforms should help improve the natural restoration of Czechia's dying forests.  But the fight for resilient forests is not over and other changes now need to be made.

The next few days will help determine whether Czech forests will begin to prepare for climate change, or whether they might further wither away – as Hnuti Duha / Friends of the Earth Czechia take the fight to save Czechia’s forests to parliament.

Czechia’s extensive forests have in recent years faced a barrage of threats - which are only set to intensify with climate change. From deforestation, to hotter temperatures, to more aggressive diseases, drought, and fire.

But after tenacious campaigning from Hnuti Duha, the Czech Parliament is considering a reform that could improve the state of forests - with the upper house (Senate) set to vote this week. 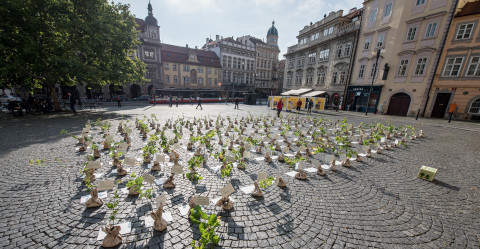 What’s the problem with Czech forests?

Czech forests have been stressed and dying off at an alarming rate in recent years. Dry years have struck Czech forests badly since 2013.

At first, the trees in the north-eastern Jeseníky Mountains, already impacted by low rainfall and air pollution, quickly began to die off. But it soon became apparent that trees across the whole country faced similar problems.

Consensus has grown that one cause of Czechia’s stressed forests is monoculture plantations of spruce trees – a species not adapted to warming temperatures. Planting forests of fast-growing spruce might have been profitable in the past, but they are bad for biodiversity and climate resilience.

But they are replanting with more inappropriate spruce plantations, creating weak forests in a warming world, as the European Forest Institute warns.

The Czech government has ignored the problem for the past decade, and failed to take action to improve forest management. 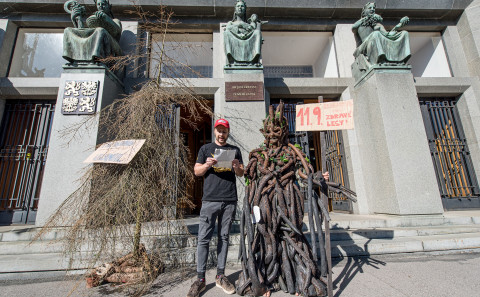 Hnuti Duha/FoE Czechia has been vigorously campaigning to make Czech forests more biodiverse and resilient to climate change. Their campaign “Save The Forests” has gained the support of 60,000 people, pressing for action in the Parliament.

Hnuti Duha have organised actions in front of the Czech Ministry of Agriculture, and presented young trees to each of the 200 MPs at an event on the square close to the Czech Parliament (the saplings were later planted in the forest).

So far, the Lower House (Chamber of Deputies) voted to support a legal reforms to improve the state of Czech forests. But the Government and the Agricultural Committee have removed many of the good propositions for living forests – including giving more time to forests to regenerate naturally, and avoiding high-risk trees.

Now this week, the Upper House (Czech Senate) has the opportunity to vote to reinstate the best proposals. Hnuti Duha calls on the Senators to back a longer period for the reforestation of forests, to significantly improve the chances for natural reforestation.

Czechia’s green forests are on the frontline of climate change, but only political action now can keep them vigorous, productive and full of wildlife in the decades to come.

Jan Skalík is the coordinator of the campaign Save the Forests, Friends of the Earth Czech Republic

Czech forests are dying off under a barrage of threats.

As @HnutiDUHA / Friends of the Earth Czechia's fight to save the forests hits parliament, Senators are under pressure to back a law for living forests#zachranmelesyhttps://t.co/LFewm7gVkk

Living with bark beetles: new perspectives on an alarming problem