Kicking the can down the road

At the start of the 1990s, it was much easier to not litter. Over the last 30 years, supermarket chains and big drinks manufacturers like Red Bull have waged – and largely won – a war against reuseable drinks containers, pumping out a stream of throwaway bottles and cans that are harming wildlife, causing problems for farmers, and wasting finite natural resources. How do we push back?

Saying 'Littering' in 2020 brings back memories of the bad old days of blame-the-individual environmentalism: change your lightbulbs, make sure to recycle, leave nothing but footsteps. This is no accident. Packaging companies have spent decades pouring money into PR campaigns to shift the blame for litter onto the people who buy their products. Sure, Red Bull might produce enough aluminium cans to build 420 jumbo jets every year, but as soon as they leave the factory gates it's up to you.

The view from Austria

The shift away from reusable packaging has been particularly stark in Austria. In 1990, four in five drinks containers sold in supermarkets were reusable: when you're done, you bring the bottle back to the shop for a refund. Glass bottles used in these deposit-return systems (DRS) can be washed, re-labelled and re-used around 40 times. Today, the figure is just one in five.

Supermarkets and the packaging industry have worked to replace reusable glass bottles with plastic and aluminium cans. This puts a dangerously unsustainable strain on the finite resources needed to create them, pumping out greenhouse gas emissions during the production process, and leaving packaging scattered across the countryside. 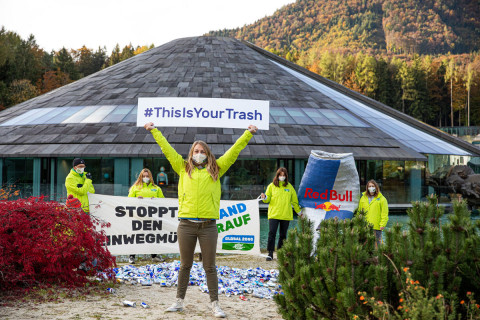 This last point isn't just an aesthetic one. Aluminium cans are shredded into dangerous shards when farmers mow their fields. Animals – wild and herded – eat these shards, suffer internal injuries, and die. Anecdotal evidence suggests that most farmers try to collect waste before mowing, but it can be difficult and time-consuming to collect them all. Litter in their fields is their responsibility alone, and if their animals die as a result there's no compensation – meaning the problem is likely massively under-reported.

The research is limited so far, but the phenomenon appears to be widespread. Around sixty percent of farmers in Flanders have had an animal injured by sharp metal, and up to 13,000 cows are injured by it every year in the Netherlands.

The most commonly-found species of litter in Austrian fields today is the Red Bull can. Research from Global 2000/Friends of the Earth Austria shows that 19% of all pieces of litter across the country are drinks containers, of which the biggest share is the iconic silver can.

The responses of companies like Red Bull to these findings, however, shows the difficulties in trying to change this system.

Red Bull refused to comment on the findings of Global 2000/Friends of the Earth Austria's research. This didn't deter activists, who continued to force the issue onto the agenda.

Global 2000/Friends of the Earth Austria visited the Red Bull headquarters in Salzburg, placing a two-metre high composite can in front of the building together with a pile of cans that had been collected from the countryside (the activists tidied up afterwards). "Dead bull gives you wings" adverts racked up tens of thousands of views on social media.

Red Bull's business model is too entwined with the design of its can to change on its own.

And while it spells disaster for farmers, animals, the climate and our finite supplies of bauxite, it's clear that they don't have an incentive to change: it's made its owner Dietrich Mateschitz the richest man in the country.

In September, Austria's environment minister introduced a plan to boost quotas for refillable drinks containers and a deposit return system, which would go some way towards solving the problem. Red Bull continues to lobby against the plan, and is joined by supermarkets and recycling companies who also have a vested interest in the polluting status-quo.

EU decision-makers are also currently working on rules for sustainable packaging, which offers a rare opportunity to help reverse the trend towards polluting single-use packaging. What is crucial is that targets to boost reusable containers are introduced for sectors where there are easy wins – such as for refillable drinks containers, food boxes, pallets, and cleaning products.